At the world’s leading industrial exhibition, the Hannover Messe, the focus is on one subject: 5G. While many exhibitors will be showing individual applications of the technology, the Aachen-based Fraunhofer Institute for Production Technology IPT and the Swedish mobile network supplier Ericsson will be presenting German Chancellor Dr. Angela Merkel and Swedish Prime Minister Stefan Löfven an integrated approach to researching the industrial use of 5G in Industry 4.0 – the concept of the ”5G-Industry Campus Europe” – on the occasion of the head of government’s traditional visit.

With wireless transfer rates of up to ten gigabits per second and latencies of less than one millisecond, 5G will open up a wide range of new applications in the manufacturing industry – especially in the area of process control. The Fraunhofer Institute for Production Technology IPT and the Swedish mobile network supplier Ericsson have jointly developed the concept of the ”5G-Industry Campus Europe”, literally the first comprehensive 5G research network to test the application areas of the new mobile network technology within the framework of production research on the Aachen campus. 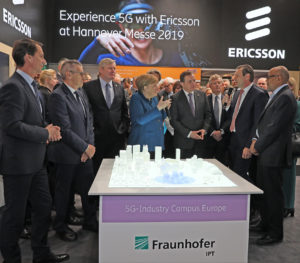 © Ericsson GmbH. On the opening day of the Hanover Fair, German Chancellor Angela Merkel and Swedish Prime Minister Stefan Lövfen informed themselves about the concept of the 5G-Industry Campus Europe by Fraunhofer IPT and Ericsson.

After a fully functional 5G network was put into operation last year in cooperation with Ericsson in the machine hall of the Fraunhofer IPT, the first prototype applications for milling complex turbomachinery components have already delivered positive results. ”A consistent next step in this regard could now be large-scale networking over and beyond the Fraunhofer IPT”, suggests Niels König, Project Manager 5G at the Fraunhofer IPT. ”We have already prepared the ground here in the vicinity of RWTH Aachen University and with our international partners, for example at the Royal Institute of Technology in Stockholm, to thoroughly test the suitability of 5G technology in a joint research network for use in industry and thus to carry out important work to convince the decision makers.”

”As one of the leading companies in the field of 5G, we attached great importance to understanding the requirements of the industry at an early stage in the development of the mobile communications standard within the framework of research cooperations”, explains Jan-Peter Meyer-Kahlen, Head of the ICT Development Center Eurolab Aachen. ”Suitable industrial 5G test environments play a very important role in this context, and the realization of this concept would also be another great example of the German-Swedish Innovation Partnership.”

The idea of the partners is promising: Numerous leading companies have already settled their offices at the RWTH Aachen Campus and use the close contact to the research institutions to develop and test applications of Industrie 4.0 in the areas of production and intralogistics. In order to actually make the use of 5G attractive for future users and to exploit the existing potential, the development of technical equipment also requires test facilities in a heterogeneous production environment.

The Fraunhofer IPT has many years of experience in almost all areas of production and the world’s first 5G New Radio system that operates completely wirelessly in a production environment. Ericsson, as the provider of the necessary mobile infrastructure, is leading the standardisation of 5G, and is one of the few companies to offer 5G systems in the mobile market today having rolled them out in many countries. The company operates a research site in Herzogenrath near Aachen, where, among other things, the 5G industrial programs are coordinated. The Fraunhofer IPT and the FIR at the RWTH Aachen cooperate with Ericsson in order to make the technology available to their partners and customers as part of joint research and development projects.

The partners will present their concept at the Ericsson booth in hall 8, booth D28, as well as at the Fraunhofer joint booth in hall 6, booth A30.